Last Sunday, during FOSDEM the second edition of the geospatial devroom was happening.
As said before we had a nice lineup with 15 presentations with topics ranging from established GIS tools, Open Streetmap, 3D visualisation and spatial databases.

Anyway, I did the first presentation on SAGA GIS, and I was happy to have some very nice slides prepared by other members of the SAGA community.
Next up was Hugo Mercier (Oslandia) who presented Tempus. Planning multimodal transportation is a very hard problem, and it was nice to see that you can actually get the sources of the whole project. Next up was Astrid Emde presenting Mapbender, an OSGeo project allowing one to create web SDI's easily.
The next talk by Zeeshan Ali, "Build a geo-aware OS" was one where I was looking forward to : the talk is not one you usually encounter during FOSS4G conferences, but an example of the crosspolination of technologies you get at FOSDEM. It shows how location can now be used in Gnome (and other projects building on FreeDesktop) using common API's.


Next up we got a full room for the presentation of Margherita Di Leo and Anne Ghisla presenting the results of the Google Summer of code projects coached at OSGeo.


Everything got even more crowded for the next talk by Tuukka Hastrup on open journey planning. As people kept trying to enter our room even though it was full, I decided to play doorkeeper and missed the actual talk.

But based on the feedback and the slides, I'm really looking forward to the video of the talk.
Still in a crowded room Ilya Zverev gave a talk about mapping with OSM with a phone . Rather than mapping using satellite imagery, it makes more sense to map when you are actually in the field. 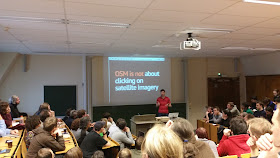 The next talks were all focused on 3D. Thomas Bremer talked about how one could implement a flight simulator in javascript. He focused on the different components that could build such a simulator. I hope to see a demo of this soon. The next talk was on the integration of Openlayers and Cesium. I missed the talk myself (one has to get lunch at one point), but I got some nice feedback. The last talk in our 3D theme was Vincent Mora on iTowns, showing impressive Lidar scans of large parts of Paris. Even though many of us are still struggling with 2D, a lot of data collection is now 3D and I think GIS systems still have to catch up.

The next block of four presentations were all on databases. Starting of with MySQL GIS. I was pleasantly suprised by the presentation. MySQL and Oracle got some bad press in some open source communities, but I believe the way they are working on MySQL is examplary: not only is MySQL catching up quickly with other (spatial) databases, this is largely done by improving the underlying boost geometry library, which can be leveraged by other projects. Oracle is currently sponsoring 2 developers on that project.
Also Rasdaman, a raster array database extension for PostgreSQL was presented. Even though their use cases may currently be 'far from the bed' of many developers, I like the fact that they are not only implementing a product, but also shaping the standards (OGC and ISO) on the way.
The third presentation focused on the geographical capabilities of a completely different type of database: mongoDB. I see a lot of possibilities of this database for geodata which is not as structured as classic databases. Nice to see their performance is improving.
The last presentation in the on pivotal Greenplum database was sometimes hard to follow, but I will definitely check it out further: I was not aware of the database, but it is a parallel database based on Postgresql, meaning that postgis functionality can be used, but also the extensions for trajectory data which were the topic of the presentation.

Closing the devroom was a presentation on geocoding by Ervin Ruci, which is a topic where the performance of open solutions can still be improved a lot.


At the end of the day, the closing keynote of FOSDEM, which was given by the people of HOT OSM. A full Janson is always something special, and this is definitely true for a topic of a talk I'm so familiar with.


To conclude, I believe the devroom at FOSDEM was a great event, and I really think it has its special role compared to other events such as FOSS4G and State of the Map - the chance to meet other open source communities.

Videos of the day should be available soon, thanks to the incredible FOSDEM video team and Anne Ghisla and Thomas Gratier who helped with the camera/organisation.

Thanks for your reaction.

Due to a recent surge in spam I have decided to moderate all reactions on this blog - I'll review your message as soon as possible.